Edit
watch 01:36
We're Getting Mutants in the MCU - The Loop
Do you like this video?
Play Sound
Major Beck 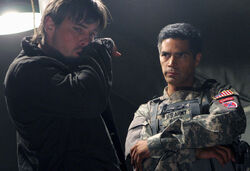 Edward Beck was an officer in the United States Army with the rank of Major at the time of the September Attacks. At some point after the fragmentation of the United States, he joined the Allied States Army's 10th Mountain Division. He was assigned to Jericho and New Bern in western Kansas as the region's military administrator in an effort to stop the two towns from further destabilizing an already volatile area.

While serving as the administrator of the region, Beck promoted Jake Green to sheriff of the Jericho police department.

Major Beck worked for the Cheyenne Government for some time and believed them to be truthful until learning that they were in fact behind the September attacks. This led to him defecting from the Allied States Army, along with all of his lieutenants.

As with most of Jericho's side characters, Beck is believable and well-acted. His personality seems to be understanding, but he is also a serious, focused leader. Beck is a professional soldier, and seems to care a lot about justice and properly protecting the civilians he has in his charge; as such, he will not tolerate revenge killings and other acts of anarchy in the region.

Beck tries to control Jericho's rebellion and acts as a "foil" for the last 3 episodes of Season 2, in the sense that he's against many of the main character's decisions. He has Heather arrested for helping Hawkins, and has Jake imprisoned and manipulated to give away Stanley's position after Goetz's murder. Heather gets through to Beck more than anyone and even makes him act despte his orders. Beck and Heather have a good friendship that could be intepreted as the beginnings of a romance. In the end, Beck chooses to help Jericho after peeking in Hawkins' laptop and discovering the real plot behind the attacks.

Role in the town[]

A military regional administrator working for the Cheyenne government. His primary mission is to stabilize the region and to rebuild and restore utility services to Jericho and its neighboring towns. Additionally, he is hunting for Sarah Mason to expose her as a terrorist, unaware of her deceased state.

As of S4.#1 Beck is the resistance leader of Jericho and an undertermined amount of territory in Central North America.

As of season 3, Beck's role has become the resistance cell leader of Jericho. Beck, since learning of Project Redbell, assumed that Jenning's & Rall had conspired at top levels to overthrow the US government and had executed the September Attacks. This led him to begin sharing the information with other higher ranking officers of the Allied States Armed Forces, as of S4.#1, Beck had recruited almost 30 officers and with them several hundred soldiers. Beck however continues to recruit more officers, believing that they have yet to muster enough forces.

Beck shows much moral conflict however, recognizing that the Cheyenne government's conspiracy must be brought to light and the United States restored, he still struggles to come to turns he has to convince the AS Armed Forces converts to wage war with their brethern.

Beck has an official connection with the Columbus government, speaking with the new SecDef and other high ranking officials. It is unclear however his military prominence. Based on his activity and lack of information on the Columbus government that Beck is one of the higher ranking US Armed Forces military leaders and is the ranking CO of the West American Campaign.

Community content is available under CC-BY-SA unless otherwise noted.
Advertisement